Everyone wears two hats.
Know which one you wear at all times. 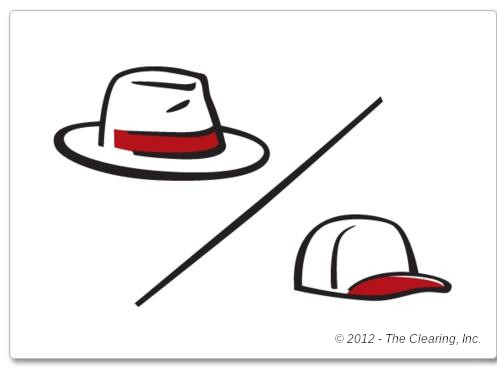 BIG HAT – LITTLE HAT represents a powerful RIGHT VS. RIGHT dilemma that groups confront constantly. It’s easy for someone to put on a BIG HAT, think like the CEO, and make decisions that are good for the company. It’s also natural and unavoidable for leaders to put on a LITTLE HAT and assess corporate actions based on how they affect themselves and their team.

Both perspectives are valuable and necessary to move a project or organization forward, but when these two viewpoints go at it in a RIGHT VS. RIGHT argument, there is simply no solution.

Leaders must become adept at wearing BIG HATS and LITTLE HATS to manage teams effectively through RIGHT VS. RIGHT challenges. BIG HAT – LITTLE HAT remains one of the top intractable dilemmas that constantly appear along the path to transformative outcomes.

Until both viewpoints are named, the conflict between them is relatively invisible. When you see a BIG HAT – LITTLE HAT argument, name it for all participants, ask them to put on the other hat and argue the other person’s point of view. Often, the argument will resolve itself.

As with so many arguments, unnamed BIG HAT – LITTLE HAT conflicts eat up resources you need to put elsewhere. More importantly, however, BIG HAT and LITTLE HAT perspectives are both needed to move the organization forward. Gain insights from them both to make better decisions.

BeBlind Men and the Elephant
Scroll to top