Balancing the As Is and the To Be. 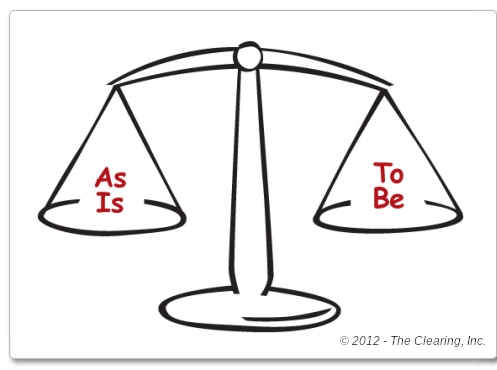 Groups achieve productive strategic dialogs and action plans when they create an authentic relationship between the As Is and the To Be agreements established in the CORE PRIME.

PARITY means devoting equal attention and detail to each of the five conversations in the CORE PRIME .  Over-analyzing the As Is and immediately attempting to build a high level vision is unwise. Focusing on the As Is and the To Be, while giving only lip service to the Strategy and the STAKE  is equally foolish.

When groups struggle for PARITY they can fall victim to the following unproductive patterns:

A group guided by PARITY is balanced and willing to go slow to go fast. They adhere to the “cruel rule of reciprocity” that states that deep agreement on the As Is will elicit deep understanding of an inspiring To Be, and a deeply felt STAKE will provide the impetus for taking action.

PARITY allows a group to forge deep and comprehensive agreements with all necessary stakeholders across each aspect of the CORE PRIME. Balanced agreements respect the rule of PARITY and act as the foundation of your process, grounding it and stabilizing it to withstand the challenges ahead.