Go beyond your usual boundaries to achieve extraordinary outcomes. 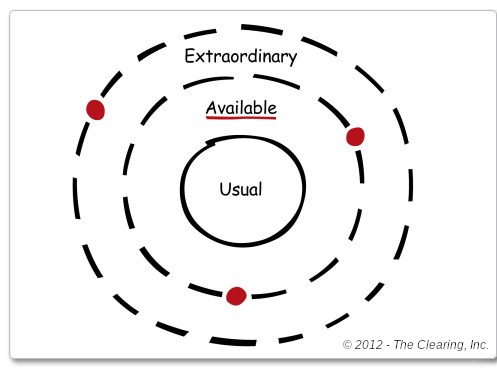 When people gather in a group, they build a fence. The fence separates what they allow and do not allow themselves to talk about. The fence defines the boundaries of the ‘usual’ conversation. These conversations generate the ‘usual’ outcomes.

Where are your group’s fences? Do you even know you build them? What would be possible if your group opened up the PERIMETER and tested the boundaries with some ‘red dot’ comments and exchanges?

Group problems are persistent because tight perimeters limit problem solvers’ conversation space. Expand the PERIMETER in a meeting by saying something neither you nor anyone else has said. Make sure the group is aware that this is a new space for conversation outside of the ‘usual’ boundaries. Ask people to join you in this ‘available’ or even ‘extraordinary’ space.

A group that expands its PERIMETER to ‘available’ or ‘extraordinary’ space will consistently allow people to provide new insights that would have otherwise been suppressed in ‘usual’ space. This leads to productive, transformative thinking that increases a group’s ability to solve problems.