Blind Men and the Elephant

Rationality is a function of the information at hand. 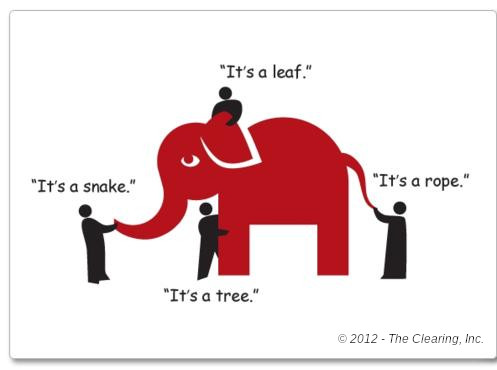 The blind man holding the elephant’s trunk has every reason to identify it as a snake. The same may be said for the blind man standing next to the elephant’s leg who perceives it as a tree. The two men arrive at different conclusions because they have different information. Once members of a team observe this dynamic and recognize that they each hold only a part of the elephant, they often resolve their differences quickly.

Rather than focus on how to help a group avoid disagreements, learn to focus on how to deal with their disagreements and help facilitate a resolution. When people disagree, the first step is to determine what information they have to form their position. Before attempting to forge a common agreement, work to ensure that everyone has access to the same information, the content of which they can agree to, at least generally. The effort may take time; however, once everyone has the same information, they are much more likely to reach similar conclusions to one another.

Before moving to manage a disagreement, pay close attention to the underlying assumptions and information behind each group’s opinion. You may need to call on LEVELS OF PERSPECTIVE and FACTS, STORIES AND BELIEFS for deeper insights. Focus on rationalizing the basis for each point of view rather than being drawn into the argument.

Not only will a focus on achieving shared information help resolve conflicts, but often the group gains greater insight when they are all looking at the same thing in the same way.