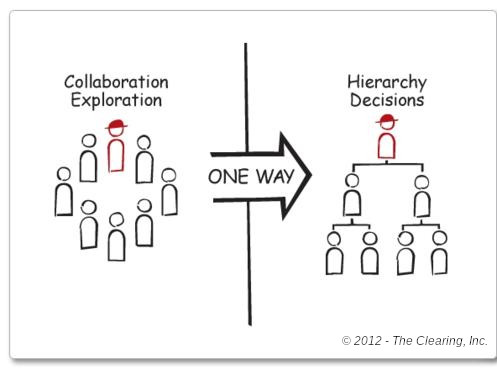 Leaders can join the group in collaborative decision-making, or rely on their organizational Authority to make decisions. People will accept either when they are explicit and intentionally stated. SHAPE SHIFTING, declaring one and doing the other, violates the group’s trust.

Every group needs and wants a leader. Two of the many types of leaders are characterized in this PRIME:

Both roles are useful. The key is for leaders to be explicit about which role they take. The most common mistake is for leaders to declare a collaborative relationship with the group and then make authoritative decisions. This changing of roles is called “SHAPE SHIFTING”.

Some decisions necessitate creativity, innovation, and the involvement and wisdom of a group. Other situations require a quick decision. Effective leaders understand how decisions are made. As stated by the LEADERSHIP SPECTRUM PRIME, you must be as skilled in Collaboration as you are in Command and Control relationships with your team. The SHAPE SHIFTING PRIME reveals potential dangers, as you navigate between these two styles.

A leader SHAPE SHIFTS when he or she declares a collaborative relationship to generate ideas, becomes caught up in the spirit of the exchange, and suddenly shouts out something like, “Bill, that’s a great idea! Let’s do that!” Instantly, the process is overtaken by hierarchy, no matter how the chairs are arranged. The leader SHAPE SHIFTED and used his or her organizational authority to behave differently from everyone else.

To avoid the often fatal mistake of SHAPE SHIFTING, you must adhere to three practices:

Be explicit about whether each particular interaction is Authoritative or Collaborative. Be explicit if you decide to shift from one to the other and don’t shift relationships with a group in any single meeting. Collaborate with them one day, and use your organizational authority at a later time to make a decision.

When a leader SHAPE SHIFTS, people shut down immediately because their own role in the process has become unclear and they lose faith in the decision-making process. Avoid SHAPE SHIFTING.