Beliefs shape the facts we listen to and the stories we tell about them. 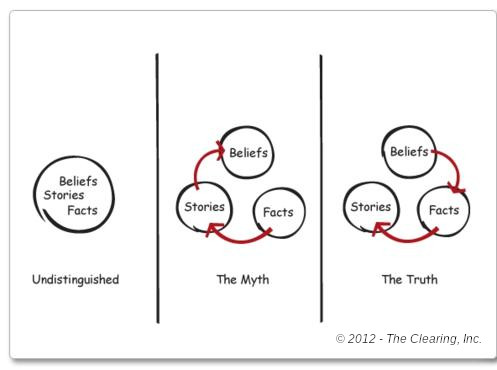 Debating facts and stories is futile when people’s underlying beliefs are misaligned. Once beliefs are called into the open, productive dialog can commence.

Building the agreements embodied in the CORE PRIME will require substantial group discussion. The FACTS, STORIES, AND BELIEFS PRIME will outfit you with the awareness of critical nuances during these conversations, the skills to intervene, and the tools to keep the group on track. As a result, you’ll help the group reach deep and binding agreements, and make commitments to act on them.

FACTS, STORIES, AND BELIEFS are exchanged in any discussion, but many fail to make the distinction between them. As seen on the left side of the illustration of this PRIME, everything sounds the same and is treated the same. An example of failing to distinguish FACTS, STORIES, AND BELIEFS may be found in the following statement: “Our revenue was $50 million last year and that is simply not enough. Marketing is inept.”
The first sentence above contains FACT (“revenue was…”), and STORY (“…not enough”) to assign meaning to the FACT. The second sentence is clearly a BELIEF. In an undistinguished listening model, all three elements are treated as if they were equally true and important.

The center of the illustration shows “The Myth,” which some people accept once they learn to distinguish FACTS from STORIES and BELIEFS. They think we listen to FACTS (“Our revenue was $50 million”), interpret them, and form a STORY (“…and that is simply not enough.”). From there it’s easy enough to adopt the BELIEF that, “Marketing is inept.” Such formulations may be true at times; however, in complex problem solving and transformation, we see a different progression at work, which is revealed on the right side of the PRIME’S illustration.

People enter conversations with their BELIEFS well entrenched. Their BELIEFS create their reality and they’ll “shop” for FACTS to support the STORIES that reinforce their predetermined BELIEFS.

When the group is fragmented and discordant, more progress is gained by shifting the conversation to explore the underlying BELIEFS, and why they’re held so deeply.

When BELIEFS are discussed deliberately and openly, they lose their hold on the group. Once BELIEFS are revealed, the group will naturally engage in a more productive discussion about FACTS and STORIES.

EnnoblementFeedback as Caring
Scroll to top