Ignore those who will never come along. 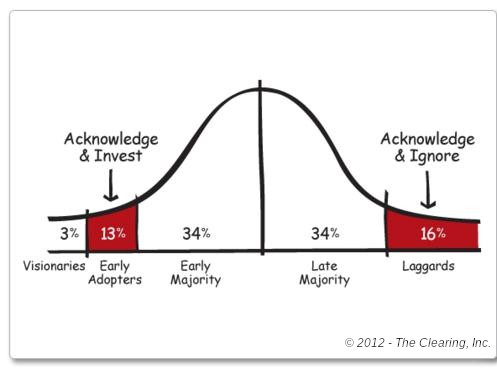 Different people adapt to change differently and good leaders identify each group quickly, working with Early Adopters who the rest of the organization will follow into the uncertainty ahead.

The Innovation Adoption Curve shows that Visionaries will jump at anything, but they have little credibility among other group members. Early Adopters are willing to take a risk if basic questions are answered satisfactorily. Early Adopters ask important questions: “What does this new possibility mean? How is it going to affect our existing market share? What are we going to do with our existing products?” They need answers and they listen; they want to be convinced. When Early Adopters have their questions answered satisfactorily they say, “OK, we don’t have it all worked out yet, but we have enough information to move.”

LAGGARDS rarely enroll fully in a CHANGE or TRANSFORMATION effort. They drag their feet and often need to be carried. They love the attention. Indeed, attention-getting fuels their resistance.

Listen to LAGGARDS, but as soon as they stop talking, ignore everything they said and direct your attention to the Early Adopters. Mentally banish the LAGGARDS; every hour invested in them is wasted. If you have 10 hours in a day, invest 11 of them with the Early Adopters. They’re your best constituency.

Your survival and the ability to reach your goal depend on distinguishing LAGGARDS from the Early Adopters as quickly as possible, and pouring your energy into the latter group. When the Early Adopters move, everyone you need moves behind them and without them your effort is doomed.