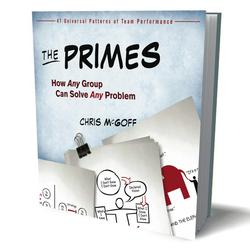 The PRIMES is a collection of “eureka” moments experienced by teams driving major change initiatives. They were revealed at some of the largest organizations in the world – the U.S. government, The World Bank and Toyota for starters – but quickly became recognized by Chris McGoff and his colleagues as universally present wherever people get together in groups. The “ah-ha’s!” in this book began as sketches on scraps of paper or the backs of cocktail napkins, usually discovered at times of desperation to help the change agents climb out of a conceptual hole and drive transformation forward. They worked then, and they’ll work for you now.

Distilled down to their essence, in readable and entertaining form, The PRIMES is a field manual for anyone ready to step up to serious challenges, predict and manage inevitable problems, create a brighter future, and produce extraordinary results.

Dana Theus – Reclaiming Leadership
How to Maintain and Use Group Power

The PRIMES featured at TEDx Rockcreek

Praise for The PRIMES:

“I started working with Chris in my former position as the Administrator for E-Government and IT at the Office of Management and Budget, at which time the U.S. was ranked 36th in the world for providing web-based government services to its citizens. Using many of The PRIMES, we became a powerful, high performance team, building a team of over 2000 leaders in the public sector using e-government initiatives to drive a citizen-centered focus for government. The outcome: The U.S. ascended to first in the world in its delivery of federal services to taxpayers, business, and other nations.”

“The PRIMES are powerful guidelines for making a big difference anywhere, in any way, any time… I will be referring to the book for years.  The clarity and simplicity of the Primes make them comprehensible and uncomplicated to apply in any situation. The concepts and values offer a path to insight on a foundation of respect for every individual and the limitless potential of teams.”

“If you want to truly transform your business and personal life to a new level, read and live The PRIMES.  Chris McGoff is not simply ‘denting the universe’; he is opening us up to an altogether new dimension.”

“I have tried and tested the wisdom of The PRIMES, with phenomenal results, and highly recommend it for one and all!”

“All I can say is give me another chance at transforming an organization. Chris would be with me in spirit through the tattered pages of The PRIMES that I would read and reread as my roadmap!  Anyone who has ever solved a problem on a napkin will love this book; it is how many problems are solved.”

“In The PRIMES, Chris McGoff has distilled a wealth of knowledge into concise, key principles that will not just transform your business or organization; they will transform your life.”

“The PRIMES is a user’s guide for taking on challenging transformations…I have seen firsthand how the fundamental truths outlined in The PRIMES can make the impossible, possible.  Read The PRIMES…to look at difficult and complicated challenges through a different lens.”