Empowering discussions focus on that which you can control. 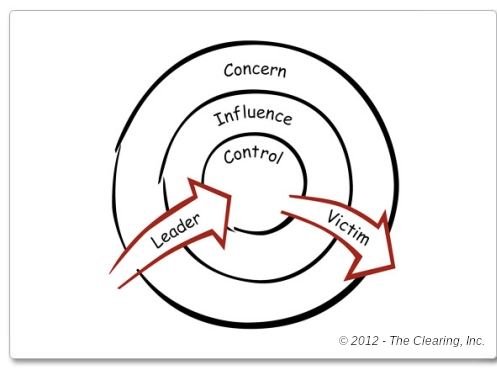 Limiting the scope of your discussions to that which you can control means taking responsibility and refusing to blame others for what they do “to” you. It can be exhausting, but it is highly productive.

Great leaders and high performance teams listen carefully to the tone and direction of their conversations. They can identify when a group begins to lose its power by complaining about things it can’t affect, and blaming others for its own lack of effectiveness. This is the sound of a VICTIM: “If Congress would just do their job, we could do ours.” There’s nothing to be gained by wishing that things we can’t control were different.

Leaders identify when groups operate from a sense of empowerment and a can-do attitude; effective leaders help victim-oriented groups regain their power, and help empowered groups sustain theirs. The VICTIM – LEADER PRIME is the “nuclear PRIME,” because when it’s brought to a group’s attention, they hate it. They absolutely hate it! Being the VICTIM is much easier than being the LEADER.

In any conversation, groups move toward being LEADERS or VICTIMS. They talk either about things they can do, or about what’s being done to them. Once this PRIME is distinguished, the group becomes directly responsible for tolerating victimhood. This awareness makes what once was easy become suddenly unpleasant and intolerable.

Taking responsibility at all times – being the cause – may feel like a huge burden; therefore, VICTIM – LEADER is one of the few PRIMES that may be best introduced sparingly. The greatest value of the VICTIM – LEADER PRIME may be to you, but pay close attention to which way the group is headed. Guide them toward talking about things they can control. That’s where their power is stored.

Listen for when groups slip into discussing things outside their control and using them as excuses for why they are not more effective. When this happens, guide them back to focusing on that which they can affect.

Many groups spend all their productive energy complaining about that which they cannot impact. Even when they don’t like it, groups that genuinely care about making a difference will appreciate the opportunity to shift into their power.

Trust the Universe
Scroll to top