GOSSIP is pure, destructive energy. Tolerate it at your peril. 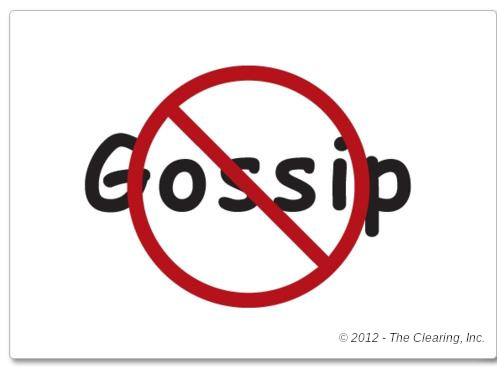 GOSSIP destroys possibility and its victims are left diminished in the eyes of the group. GOSSIP stops when no one listens.

GOSSIP wastes energy. When you’re up to something big, a CULTURE of zero-tolerance for GOSSIP is critical.

In this context GOSSIP begins when two or more people talk about someone in a manner that leaves that person diminished in the eyes of the group. GOSSIP’s destructive power unleashes when no one commits to engage with the person in a constructive manner.

Even though GOSSIP is such a damaging force, it’s pervasive and tolerated to some degree in most organizations. Attempts to eliminate it often prove ineffective because many people who engage in GOSSIP fail to recognize their own behavior.

GOSSIP stops when no one listens. The keys to eliminating GOSSIP are teaching everyone how to recognize it and securing their agreement not to participate in it.

Stopping GOSSIP is as simple as this: when anyone begins to complain about another person, no matter the reason, ask, “Before you go on, will either of us approach him or her directly about this?” If the answer is no, stop listening. As a leader, when you stop engaging in GOSSIP, others will too.

Eliminating GOSSIP creates the possibility of sustaining a CULTURE in which group members actively invest in developing all other members.

Eliminating GOSSIP frees energy to face the challenges of the business.

FragmentationIn – On
Scroll to top