Knowing what you want increases your chances of getting it. 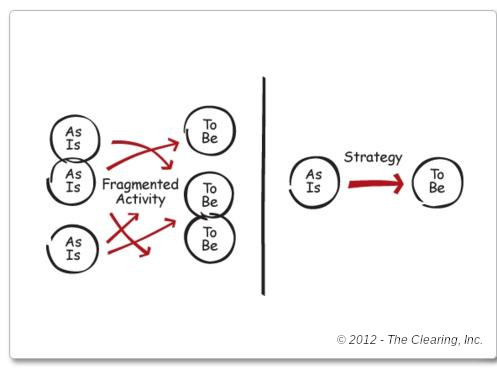 COHESION may be one of the most critical elements to manage as a group charges against its challenges. COHESION is present when everyone gives the same answers to the following questions from the CORE PRIME:

Without investing in COHESION, individuals tend to have slightly, even significantly, different views of their current situation and of the urgency to change. They also have different views of what they’re creating. When these differences prevail, they fragment the group’s focus (FRAGMENTATION) and dissipate its energy. The COHESION PRIME reminds us that people work on different activities and at different intensities. Expect FRAGMENTATION, but drive for COHESION and do whatever it takes, as many times as it takes, to establish it.

When you see groups acting in COHESION you will observe different parts of the organization making aligned decisions and moving in consistent directions. Effective leaders identify areas where coordination and reinvestment in the CORE PRIME will help maintain COHESION, and take action to encourage it.

Without proactive investment in the unnatural act of COHESION, the natural force of FRAGMENTATION will occur and bleed the energy out of any change or transformation initiative and it will fail.